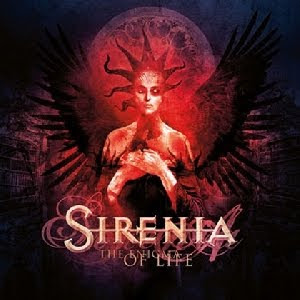 This is Sirenia's follow-up to the rather ho-hum, not to mention short, The 13th Floor, and after that disappointing effort, I really didn't have any huge expectations about The Enigma of Life.

I have listened to this album several times though, and I can't shake this overwhelming feeling of ambivalence I have in reaction to what I hear.

On the first listen, I was prepared to write a semi-positive review; my initial reaction was of pleasant surprise. The album was better than I was expecting. For one thing, it's longer. For another, you cannot beat Morten Veland when it comes to creating catchy, hooky hooks. There is a much larger symphonic element present in EoL, which for me is a positive. Ailyn sounds good.

But on the fourth or fifth listen, the Morten Forumla starts to grate and an overwhelming sense of genericism settles in. The songs start to all sound the same: same structures, same choirs, same...everthing. At this point, it's hard to tell the tracks apart because they are so similar-sounding.

I do have to say that the songs are just a tad more complex than they were in The 13th Floor, and for the most part they are longer than the previous album's 3:30 average length, yet they are still overly radio-friendly.

I enjoyed that there is a Spanish song on here, "Oscura Realidad", though it is sung to the same music as the first track, "The End of It All." Other songs I enjoyed were "A Seaside Serenade" and "Winter Lake."

Eye-roll inducing songs were "Fallen Angel," which just contained some terribly cliche lyrics and imagery, and "Darkened Days to Come" for similar reasons and because it was slightly cheesy.

My version contained a bonus track with an acoustic version of "The Enigma of Life," which was OK.

I do like Ailyn's voice. It's not bad at all, but again, I have some ambivalence: is it the right voice for the music, or is she kinda wasting her pipes with mediocre material? I just don't know.

All in all, it's a better album than The 13th Floor, and I am a sucker for catchy, hooky hooks, so that I liked. I just wish Morten could vary his formula more and perhaps move on to some less tired subject matter. There is a lot of great Gothic metal out there that isn't totally about internal doom & gloom. Yeah, you have to look a bit harder for it, but it does exist. Which is probably why I've grown out of Sirenia; Where Angels Fall has it going on, as does Akoma, as does Satyrian, etc.

As usual, just my two cents, for what they're worth. Horns neither up nor down for this one.
Posted by Allyson at Wednesday, February 09, 2011