There are very few albums out there that really impact and change the course of music or a genre for many years to come. Some albums have been redeemed as classics while others are considered timeless. One of those albums is Nightwish's "Oceanborn", and it is without a doubt one of my personal favorite albums of all time.

Since the band did not have an official bass guitar player during their first release, Nightwish hired bassist Sami Vänskä who was originally from Nattvindens Gråt and played alongside Tuomas Holopainen before his days in Nightwish. I think his presence really impacted the band and gave them some different approaches to the music. Alongside his friend Tapio Wilska, who was the vocalist for Nattvindens Gråt and most known for his work in Finntroll, he appeared as a guest vocalist for a couple of the songs on "Oceanborn": "The Pharaoh Sails to Orion" and "Devil and the Deep Dark Ocean". The songs on this album are more progressive, more symphonic, and more complex than what we saw from "Angels Fall First". 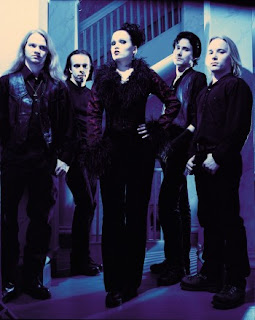 So here is my song by song review:

1. "Stargazers": Immediately, we are treated to symphonic power metal greatness right from the beginning. Excellent bombastic intro with a mysterious sounding melody that leaves you in awe. We are also treated to perhaps the greatest vocal performance of Tarja Turunen's career, especially the high notes in the chorus where she sings "Watching the eyes of the night". Symphonic metal really does not get much better than this, and this is really one of the best Nightwish songs of all time. Definitely deserves a classic rating. 6/5

2. "Gethsemane": The song begins with what I consider one of the most memorable melodies of all time. After that we get a very emotional song with Tarja once again putting out another stellar performance. The song is complex and very powerful with perhaps the most poetic lyrics of Tuomas' career. Definitely one of their most complex songs they have ever written and Emppu's lead in the outro is memorable. 5/5

3. "Devil and the Deep Dark Ocean": Starts out with a great riff and does not let up from there as a pure balls to the wall song. This is one of two songs on "Oceanborn" with Tapio as a guest vocalist. This is indeed one of the darkest and heaviest songs in the band's history. Not as good as the first two songs, but it definitely is a good one. 4/5

4. "Sacrament of Wilderness": A mid-tempo power metal number with an amazing intro with the keyboard and guitar work. We are once again treated with great lyrics from Tuomas. Tarja does an outstanding job on this song. The whole song is just pure power metal perfection. 5/5

5. "Passion of the Opera": The intro has one of Emppu's greatest riffs of all time, followed by a great performance by Tarja once again, especially with her vocal solo during the breakdown of the song all the way to the end. Very powerful and moving. 4.5/5

6. "Swanheart": To be quite frank, this is a beautiful ballad. Tarja's voice is emotional, Tuomas' melodies on the keyboard are great, and Emppu treats us with a great outro guitar solo. Definately one of Nightwish's best ballads and most underrated. I personally find this song better than "Sleeping Sun", well at least in my opinion. 5/5

7. "Moondance": The album's lone instrumental. The main melody has a Russian feel to it, giving it the atmosphere it needs for a great piece. It is fun and exhilarating and has a nice ambient middle section. 4.5/5

8. "The Riddler": A very interesting song. The verses in the song sound very "electronic" the way Tuomas' wrote the melody during that part. It is a good song, but I find this one a bit weak in comparison to the rest of the album. Still good though! 4/5

9. "The Pharoah Sails to Orion": This is one of my favorite Nightwish songs and for many good reasons. The intro starts off very eerie and dark, followed by Tapio darkly reading off a Bible verse. After that follows the main keyboard melody which is as amazing as you will ever hear from any band. The guitar riffs are awesome, Jukka's drumming is top notch, and Tarja and Tapio really give this song justice. Epic and amazing, this goes down as a classic song with an amazing outro to cap it off. 6/5

10. "Walking In the Air": A cover of a song by Howard Blake. Tarja really sings this one very well as usual, and it really stays true to the original in what Nightwish is able to make of it and that is to turn it into a symphonic power metal song. Nice cover. 4/5

11. "Sleeping Sun": Even though this song was not on the original track list of the 1998 release of "Oceanborn", I am going to put it on here since it was on my copy of the album when I got it. Anyways, the song is beautiful, it is a Nightwish classic about the eclipse in 1999 and many fans claim this to be one of their best songs. But personally I think this song maybe a tad overrated in my opinion. I am not saying it's bad, but I think it gets a little too much craze especially when Nightwish has written better ballads in my honest opinion ("Dead Boy's Poem", "Swanheart", "Angels Fall First" just to name a few) Anyways, it is a Nightwish classic regardless. 4.5/5

12. "Nightquest": This song was a bonus track for "Oceanborn", but I will review it anyways. This is a song about the band. The opening riff is very good, the keyboard licks have a more "rock" feel than what Tuomas usually does, and the song overall is just fun and exciting. Very underrated song. 4.5/5

So that is my review of "Oceanborn". Here is what I thought about it:

Pros:
-Solid songwriting and plenty of technicality throughout
-Improved production from their last release
-The band showcases the extent of their abilities on this release
-Awesome ambiance and memorable melodies
-Lyrics are top notch
-No filler tracks

Cons:
-Hardly any cons, so if there are any issues, they are very minor! XD

Following the release of this album, Nightwish has not made an album that would match this since. It really is a stand-out album in their discography and a classic for the symphonic metal genre and for female-fronted metal as well. This is the album that represents the quality by which symphonic power metal is done. "Oceanborn" ranks among the best in metal albums along with Metallica's "Master of Puppets" or Iron Maiden's "Powerslave" just to name a few. I put this album in my top 5 albums and with good reason. Metal never sounded more beautiful! Definitely a genre changing album and a classic. This deserves a 6/5 and a rare DOUBLE horns up! \m/ \m/

is there any posibility to do analysis of Tarja's voice? you know just few song from each album, how she sing,control her voice, keep notes etc.

Well I can help with your question in a way. I think Tarja's voice really started to peak out on "Oceanborn" and she really did go to the max of her abilities as a singer on that release. Her control was great it really shows through. But I personally think that her absolute peak in her ability to sing would not come until "Wishmaster" (which happens to be the next album). I think she improved tremendously from "Oceanborn" to "Wishmaster" as far as technique and singing style is concerned, but "Oceanborn" is where she really used her talents to the max at that time and I don't think she ever reached this high ever again since. The notes she reached on "Stargazers" or example.. wow.. only the very few can reach that and make it sound as good as Tarja did it. I hope that helped.

I have to also add that OB has always had my favourite album cover from NW!

i prefer Once or Wishmaster more:)

I have almost nothing to add to this review. The only thing I just don't get is why "Devil & The Deep Dark Ocean" is so unpopular. The part where Tarja sings about setting the dolphins free is THE goosebumps moment on this album to me.

And "The Riddler" is very cool, while "Sacrament of Wilderness" is a tad overrated, especially the chorus - the rest of the song is great and the keyboard trills always make me think of the Northern Lights, but the chorus is almost an anticlimax, perhaps because it's too slow. I also think that "Nightquest" is underrated and "Sleeping Sun" a bit overrated - it's distinctly written with "hit compatibility" in mind and honestly rather generic, songwriting-wise. It was the first Nightwish song I heard so this verdict is not easy, but I have to take the pink-coloured glasses of nostalgia off for it.

"Moondance", ironically, was the very first piece (but Sleeping Sun was the first actual SONG) from Nightwish that I heard, and I was totally surprised by it as I had never fathomed the existence of this kind of music. I, too, always thought it sounds Russian in style.

This album has a killer atmosphere! They added a ton of reverb to Tarja's voice (unlike on Wishmaster), which gives it that cathedral feeling. It seems that Tuomas was really enthusiastic at the time. The whole album sounds like a celebration of Tarja's voice, and established her name in the scene together with the band's incredibly good reputation, of course. "Once" may have shot them to stardom, but here is where they were at their creative, technical and artistic peak. It's a very ambitious album, however, and therefore not as easy to digest as "Wishmaster", "Century Child" or "Once".

Thanks for your comment! Yeah, "Sleeping Sun" is overrated I think. It is a good song, but it doesn't come close to some of their other stuff. "Nightquest" is underrated and doesn't really get any kind of recognition from the fans. Yep, this album is their zeinth and I do not think they will ever hit this high ever again. This really was a memorable album for sure!