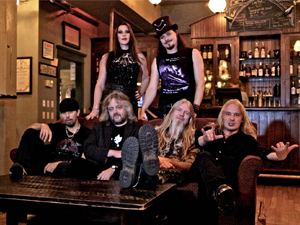 Nightwish played their only gig in London on 5 November 2012 at O2 Academy Brixton and I was there. The last time saw Nightwish was back in 2005. I was very happy to see them again beacuase I decided to skip the Dark Passion Tour. And of course I was looking forward to see Anette live. But as we all know by now Anette is no longer member of the band and Floor Jansen (ReVamp, After Forever) joined Nightwish to help them to finish the on-going Imaginaerum tour.

So there I was queuing since 4:30pm waiting for the doors to open at 7pm. There was already a bigger crowd there. I actually felt a bit strange, because I decided to go on my own but I don’t regret it. The first surprise of the evening came before the concert itself. One guy started to shout that O2 network costumers will have a priority line so therefore will get inside sooner. Lucky me I am O2 costumer so basically I got inside the venue before the poor people who were freezing there in the cold longer than I did. Might be not fair but some witty people went to Poundland to buy O2 SIM cards. Easy solution.

The doors opened at 6:55pm and when I got inside the venue I could decide whether to go to 4th row or lean against a “bar’’ and be safe or go and sit at the balcony. I decided to play it safe and lean against the bar. It was also a practical solution in case I will need to take off my coat I could safely put my coat on it. And here comes the second surprise of the evening. It was rather cold in the venue.  Air-condition was on almost all the time so I wore my coat all evening. But I’m happy for that. I hate when venues are hot.
I managed to get a good spot. I was in the middle so I could see the stage without big problem. Even people in front of me were shorter so everything seemed perfect. But not for long. 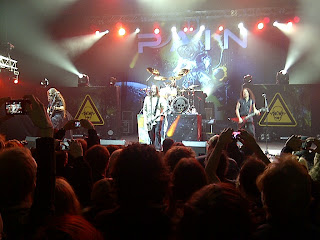 Pain was the support act and the only one. They got on the stage at 7:45pm and played for 45mins. I am not very familiar with Pain songs. But I recognised two of them. “Dirty Woman” and my favourite “Shut Your Mouth”. The last named was also the last song of their set. I think Pain was a good support act. Maybe not everyone’s cup of tea but their performance heated up the crowd bit. Peter is very funny guy and he did interact with the crowd well. I might go and see them in February when they play in London again.

And now we had this, what seemed to be never-ending waiting, for Nightwish. And now follows a little rant. Why the hell you 6 feet tall guy push your ass through everybody just to get better spot ending up in 8th row standing in front of 3 girls who are pretty short, who had stood there well before you came and when they dare to tell you to move a bit because they can’t see anything at all you start to swear at them?? And then standing there like a bloody statue taking a couple of photos and making faces like what am I doing here??? Thank God he didn't stand in front of me. But I was a bit unlucky as well. There was a tiny little gap in front of me and guess what happened? Another idiot came and squeezed there. This time it was girl who wasn't as tall as that guy but she definitely ruined my perfect view. But there was no point in saying anything. I just didn't want to end up with a black eye.

At about 9:10pm the lights went off and the intro ‘Roll Tide’ started to play. From then on I experienced something called ‘the shortest 90minutes of my life’. 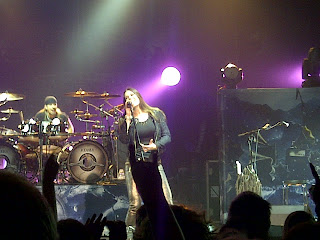 After the intro ‘Storytime’ was on. Floor came on the stage and a big roar echoed around the venue. I believe she just owned the whole evening. The setlist was the same one as they played in Manchester night before. Mostly, it was a mix of ‘Once’ and ‘Imaginaerum’ songs with a classic ‘Over the Hills and Far Away’. To be honest I was a little bit glad that Anette wasn’t there that night. Don’t get me wrong. I have always supported Anette and am curious to hear her solo album, but most of her ‘oldies’ versions were simply bad. She just lacks power. And power is a key point in most of the oldies. Floor did an amazing job on oldies. She might struggle a little bit with ‘Ever Dream’ but she didn’t use her operatic voice. Actually, she used her operatic voice only on ‘Dark Chest of Wonders’ and ‘Ghost Love Score’ but you could barely hear that. She also pulled ‘Imaginaerum’ songs off very well, too. One song I couldn’t stand live was ‘Amaranth’.  Anette struggled with it a lot but Floor managed to make this song listenable. She even added a little twist to the song. The way she sings ‘the Never-Fading Rain in your heart’ sounds really great. ‘Scaretale’ was the song I was really looking forward to hear live. Anette sings this one incredibly. After watching YT’s videos of Floor singing this song I was skeptical  I didn’t expect Floor to be able to pull it off the ‘’theatrical’’ way as Anette did. But she did it. She even growled! The acoustic set was very nice also. Many people complain about ‘Slow, Love, Slow’ and ‘Nemo’. I don’t really mind that. Another surprise of the evening was ‘Last of the Wilds’. When I listen to ‘Dark Passion Play’ I always skip this song. I find the studio version very boring but man it is a great live song. Almost everyone was jumping up and down. It’s really good song to add a bit of speed or even wake up some people after the acoustic set. Definitely, the highlight of the night was ‘Ghost Love Score’. Floor sounds really superb. Although, she doesn’t sing this song operatically throughout, she does add some operatic vocals here and there. 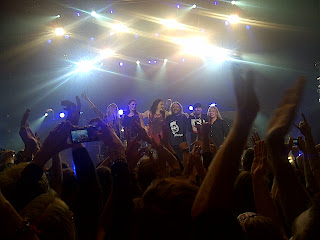 ‘Last Ride of the Day’ was indeed the last song played by band. I find this song to be a good one to close a successful night with. And Monday night was successful without any doubt. The band was all smiles throughout the night. Marco and also Floor were very talkative. Generally, they all seemed to be very relaxed and happy. I believe they enjoyed the night as much as most of us did. 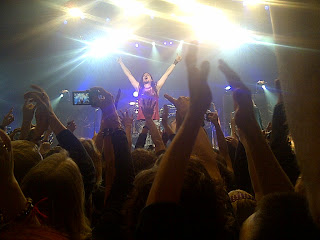 Truth to be said, I didn’t miss Anette much or better said at all. As I said I have supported her right from the beginning but her live performance was just bad. Although, people say she improved her   live performance a lot since 2007, most of her ‘oldies’ versions were bad. I think I need only one hand to name the old songs I like with her vocals. With Floor on the board now, the justice was done to them, finally. And she doesn’t even sing them the ‘original’ way. I enjoyed Floor’s performance a lot. She is an incredible singer and knows how to put the show on.  The crowd loved her yesterday. And when I said that I don’t want her in Nightwish that was probably the biggest nonsense I have ever said. Being a witness to what happened yesterday I have to say I want her to stay with Nightwish. I will be disappointed if she doesn’t but whoever will be Nightwish’s new singer I feel sorry for her already. She won’t be compared to Tarja and Anette only but even to Floor. And given the circumstances Floor has had to face and how well she is handling it, whoever comes next will have it very tough.

FYI: These photos are mine and since I took them with my BlackBerry mobile phone, they are very bad quality.
Posted by Lizzie at Tuesday, November 06, 2012 1 comment: