CD Review: Tarja's "What Lies Beneath"

All righty, it's my turn to weigh in on Tarja's new release. I have a slightly different take on What Lies Beneath, but I am not a musician like Eric is, so I usually have different takes on most of the music we have in common.

First of all, let me say, I had one hell of a time actually getting this CD into my hot little hands. I ordered it from The End Records in the States and it took over 4 weeks to get to me. I could have ordered it from Amazon Canada, but at the time the pre-order became available on The End Records, Amazon didn't have its act together and the CD wasn't available from them for several days after I decided to go with TER. Also, the price wasn't as good, and here in BC we now have an extra sales tax that would have added more to the price. The US exchange rate, however, is around par, which is excellent, so it was going to be less expensive for me to get the CD from TER instead of from a Canadian vendor. BIG MISTAKE. Given how long it took for the CD to arrive here, I should have spent the money and gotten it from Amazon because I would have had it in one week as opposed to 4.

Anyway, now that I do have the CD and have had ample time to listen to it, let's get down to what I think about it.

To put it succinctly, I love it.

As Eric said, it has its weaknesses. I think "Until My Last Breath" is probably the most commercial track and probably the weakest - which isn't to say I don't like it, but it's not quite up there with many other songs I can mention. I also can't quite get behind "Montañas de Silencio;" while her voice sounds amazing here, it's just not my cup of tea. And "Little Lies" doesn't quite enthrall me, though I appreciate its heaviness.

The rest of this album, though, is beautiful, and the beauty is what captures my interest and heart here. The harmonies, symphonic elements, and the obvious increased versatility and power of Tarja's voice make this CD so amazing. This release also shows off so much more of Tarja's heart and soul, and so much more of her talent, than My Winter Storm did. That album, to my ear, had an empty feeling to it and seemed to be missing complexity, variety, and the soul of Tarja. WLB has all that in it. Lyrically, this is a strong album, and I had a good feeling about this element when I heard Falling Awake for the first time. I respectfully disagree with Eric's opinion about this song; I love it because it's about empowerment and I think, given what we know Tarja's been through in the past five years, that this song marks a real turning point in her ability to express raw emotions and to show us the healing process she's been through since the whole Nightwish debacle. "Falling Awake" may not be especially complex musically, but I identify with what is being expressed by Tarja here, and for that reason it's one of my favourites on the album.

Other highlights for me are "Anteroom of Death" which I think was an awesome choice for the first song; it's progressive, it's heavy, I love the imagery it evokes, and I love that van Canto makes an appearance in it. I also love "Underneath", "In for a Kill", and I really do love "I Feel Immortal." One song I find especially evocative is "Naiad", which appears on the bonus disc. This is such a beautiful, romantic song that I can just imagine myself dancing to with some lovely man under a glitter ball in the dark. If you think that sounds cheesy, tough tiddlywinks. But if I ever get married again, this will be the first dance song - and that's saying a lot since I hate weddings, I hate dancing, and I hate the concept of the first dance - and I will even consent to a dancing lesson or two so I can do this justice! So there!

In general, I really admire the variety of sounds and styles Tarja plays with here. If this is the new musical direction she is taking, then bring it on, because it's awesome, and it outshines MWS by a million light years.

All that being said, I do have some complaints (this is me, after all). First of all, we all know of the confusion pre-release about the various versions of the album and some of the songs, who was getting what artwork, and all that. Yeah, I'm a little pissy about that still, actually, especially because the version of "Falling Awake", which features a guitar solo by Joe Satriani, isn't as good as this version I found on another site with a different solo. The Satriani solo seems like it's more of an afterthought and that it's trying to hard to stand out. I also prefer the GAS video version of "I Feel Immortal." The version on my CD is rather different, where some of the keyboard melodies have been left out or re-done, and I don't find it as effective as the GAS video version. 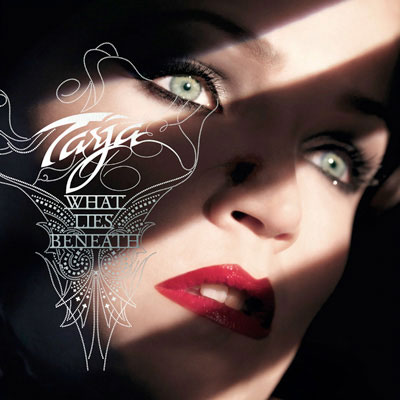 Additionally, I am not impressed at all with the el-cheapo digipack packaging this CD set came in! Basically, we have no spine here and two sleeves. The CDs are tucked into the sleeves, one with the booklet itself. I have plenty of other digipacks that have a hard plastic CD holder in them, which makes the product more durable and gives me a little more confidence that my CDs are being protected when they get shuffled around or when I move, or whatever. I love the album art a lot, but this digipack sucks.

I am super happy for Tarja and what she's accomplished here, and I am very excited about her future because she has it made, people! I hope she announces some North American tour dates soon, because I WILL go out of my way to travel to Vancouver or Calgary to see her live!

Great review! It is cool to see the differences between me and you in musical tastes as it is shown here! :D

Well, we experience music differently, since you are a trained music dude and I am not. And that is cool. As long as we get along, it's all good! :)

Yeah, I can see how someone attuned to hear those kind of things can go like, for example, "oh come on, this chord progression is SO overused" but those who aren't likely won't care, or, if they are attentive listeners, only find fault at a subconscious level. As long as we can discuss music more deeply than "It sucks" - "No, it rocks" we can be satisfied already.

Almagest, I completely agree with you! As a musician, guitarist and bass guitarist, I know what is cliche in genres and I know what to look for it chord progressions, melodies, complexity, etc. Sometimes being simple in songs is OK too! There are times when too much complexity can be overdone and hard for the listener to understand it. This is probably why I never got into some of the underground progressive "mathcore" or bands like Behold the Arctopus. Though that music is complex, I feel that the sheer level of complexity interfers with good songwriting. An example of decently complex music along with good songwriting is music from bands like Symphony X, Adagio, Dream Theater, Wuthering Heights, Wintersun, and so on. For me, it has to have good songwriting and a good level of complexity without losing focus of the quality in the song structure! :D

I know! I find that some styles complement each other perfectly, especially prog metal and power metal. Power metal for the catchy, fun melodies and prog for the edge. (Kinda how traditional classical pieces for all their complexity can boast very memorable hooks that make them accessible even to casual listeners, something that modern pieces often intentionally eschew.) A friend of mine has expressed it this way: prog metal compositions tend to be overly chaotic, power metal overly orderly, musically, which is why they compensate each other's weaknesses. I found this very insightful.

Of course, Dream Theater's pieces don't sound THAT power-metal like, but they still pay a lot of attention to hooklines and inventiveness, making every album and track stand out as having a different "sound profile" and identity, which is certainly a key to their success and the reason why they can get away with a lot of more or less gratuitous or pretentious complexity, while remaining accessible. :P

Generally I think it's a good approach for a songwriter to establish a basis in an accessible, tried-and-true style and build up on that foundation (and, of course, keep a reasonably open mind - as a non-musician, I can afford more snobbiness, haha :P - on the quest for ideas). As a band, it's a good idea, I'd think, to start covering - say - popular hard rock classics, the way Sonata Arctica have done, and learn from their example, gradually refining and "progressing" your style and making it more unique sounding, even if it might eventually end up something quite different.

Sometimes I have the feeling that Tarja is a bit too ambitious, disoriented and all over the place for her own good at times, but I do appreciate how she seems to pay a lot of attention to the rhythmic foundation and the "groove" of songs, as this is, after all, what rock music is ultimately all about. Now she should turn her attention to the lead instruments more, and elaborate on the basic structures, I'd say.

I believe she could really profit from making herself familiar with the functions of a modern music workstation - those apparatuses are incredibly powerful nowadays, it's almost daunting. Having a second guitarist would be a good idea, too, and a more permanent band that she can jam and compose with more collectively.

Almagest I agree with you on most of what you said! That is why I like power metal and prog metal so much because they both have a good deal of complexity but find ways to stay accessible and enjoyable to the listener. It's like in art if someone were to have a super complex painting of a very controversal image that may be offensive to some ppl (whether it would be sexual, overly violent, or just plain wrong). Sure it may be nicely painted, and the details in the painting are spectaular, but in the end it isn't something ppl would want to look at most the time. The same goes with music.

Oh, and thanks for the great review, Canuck! Not as detailed as the other one, but I guess you just addressed the parts where you saw things really different, as it would have been pointless to repeat everything :)

I also don't need to do a song-by-song - Eric is the musician so it makes more sense for him to break things down in that kind of detail. I tend to be way more pickier with my book reviews. :)

By the way, I was VERY critical of Until My Last Breath when I heard it first ... I still think it's too radio-friendly, and there are hardly any symphonic elements, but I have softened to it considerably in the meanwhile, especially because of the video where Tarja really "sells" the song as far as I'm concerned. =)

It's kinda funny, though, that there are so many upbeat tunes on WLB even though Tarja has professed not to like "happy metal" anymore in the past!