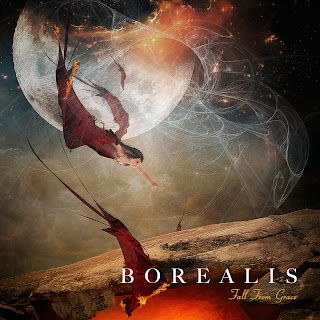 Since discovering this Orangeville, Ontario band a couple of years ago via Last.fm, I have been a big fan. Borealis's debut CD, World of Silence was powerful and mature for such a young band, and I felt right away that they had a bright future. The guitar work, vocals, synths - pretty much everything - were all so strong that the world seemed to be their oyster. Long did I await their follow-up, Fall from Grace.

As the saying goes, "ask and you shall receive." Lion Music, Borealis's new label, had an application process for prospective reviewers, so I applied, was accepted, and very soon I was able to download a review copy of FfG courtesy Lion Music's site.

And it was so worth it! Borealis has done it again with an amazing release that belies their youth. Exploding out of the gates, the opening track "Final Hour" impresses right off the bat with a pounding heaviness, and, wouldn't you know it, the echo of a growl in the background! Immediately, I noticed the drumming, performed by Sean Dowell. Drumming isn't something I normally notice much, but for some reason, the drumming in this track - and throughout the entire album - really stuck out for me.

This album gallops along at full throttle (sorry to mix my metaphors) and never rests. It's fast, and I think an improvement in the complexity department over World of Silence - which says a lot. I also felt that the keyboards were, for lack of a better word, integrated more into the tracks than they were in WoS. Matt Marinelli's clean vocals are also a real highlight, as is, again, the superior guitar-work done by Marinelli and Ken Fobert, who, incidentally, has since left the band.

Standout tracks for me are the aforementioned "Finest Hour", "Where We Started", where I can hear a definite Nightwish influence in the guitar parts, "Regeneration", where I also hear an Oceanborn influence and is also one catchy tune, and the slower, acoustically-driven "Watch the World Collapse", which I think shows off the bands sensitivity, emotion, and versatility very well. This is a metal ballad done right.

I only wish the lyrics had been part of the downloads from Lion Music, because one thing I really enjoy about real CDs as opposed to downloads is sitting back and listening while reading along with the lyrics. I also wish there were more than 9 tracks!

I can't say enough great things about this album, and I really hope this launches Borealis into the greatness it deserves. Congratulations you guys - this rocks! Double horns up! \m/ \m/
Posted by Allyson at Sunday, May 15, 2011

"Forgotten Forever" is easily my favorite song from this album and I agree, it's a superb album! Kev should have a Borealis review up on Black Wind fairly soon!

I am also really digging "Breaking the Curse." This is one wicked album for sure! Looking forward to Kev's review.

Bah, I meant INTERVIEW. Pardon my brain, it's fogged by the outstanding new Wisdom album. :P