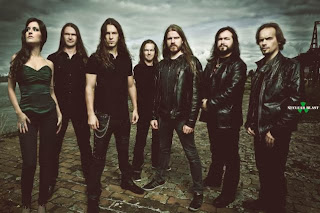 According to the press release, the main album's concept is based on "the current state of the world which is going totally insane". 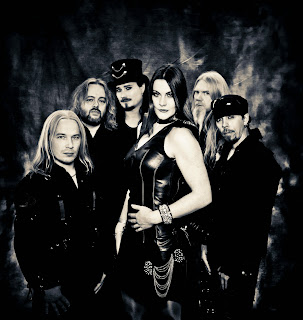 Nightwish stated numerous times that we have to wait until 2014 to learn the name of new vocalist. But
apparently plans changed and on October 9th Floor Jansen was officially announced as new lead vocalist. Also, Nightwish has no more 5 members but 6! Troy became new full-time member of the band.

Here is the press release:

Ms. Floor Jansen is a keeper.
Also, we will be a six-piece band from now on, as Mr. Troy Donockley (uilleann pipes, low whistles, vocals) will become a full-time member of NIGHTWISH.

Originally we were going to wait until 2014 to make a decision about the future line-up of the band, but the past year has clearly shown us that Floor and Troy are perfect matching pieces of our puzzle, and we are really
grateful of the bond that has grown between all of us. We love you guys.

Commented vocalist Floor Jansen: "Words cannot describe what I feel! This union is beyond everything and I cannot tell you how wonderful it is to continue this amazing journey with my new brothers! Once I had a dream....and this is it!!!"

Piper/whistleman, added vocalist Troy Donockley: "'Imaginaeum World Tour' was a revelation to me an in that time, I became aware of a growing unity and then, finally, a transcendence of all the usual nonsense that affects bands. A beautiful process. And since the idea, the musical dream that NIGHTWISH has been a part of me since before I was born, I am delighted to officially sail into uncharted waters with my brother and sister. Wondrous scenes Ahoy!"

The new line-up can be seen on the live / tour documentary Showtime, Storytime, released on November 29th.