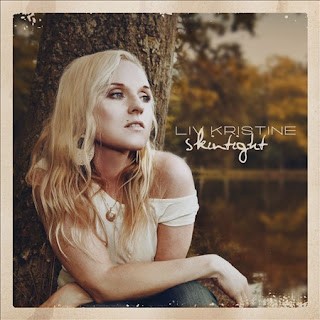 Oh, how I love Liv Kristine! I love her voice, she rocks the corset, she is ridiculously gorgeous. I first encountered her a few years back when I discovered Leaves' Eyes, which subsequently became one of my favourite bands and Liv one of my favourite vocalists. It did take me some tome to clue in, however, to the fact that she had a solo career on the side that was more of the pop/rock persuasion than the metal. I listened to Deus ex Machina and it was not my cup of tea, though I love how she sounds on it.

When I heard Skintight was coming out, I wouldn't have given it much thought, except I read Liv's description of the concept, and I was intrigued. She said:


Most recordings were done 'in one go,' i.e. record a complete song without
breaks. Moreover, we've kept and paid attention to the natural processes which
take place during singing, like breathing, movements of the lips, emotional
expression and strength etc. All this makes the album authentic, real, and
direct. The music is played with only a few, however, original instruments.

Recording a song without breaks sounded very curious to me, since I am not unaware of the fact that the complex multi-tracked recordings I usually listen to are obviously not recorded all in one go. The simplicity Liv described above appealed to me, as did the idea of using only a few instruments. Upon the release of the "Skintight" video, I was a little skeptical. There is kind of a flashy, fashion-y thing going on here that put me off a bit. Things change!

Since finally receiving my copy of the CD and sitting down with the CD booklet and really listening to the songs, I am in love with this release. I am addicted to the song "Skintight." I wouldn't necessarily class the CD as pop, per se. It's a mellow rock with a lot of acoustic elements in it that speak to the concept of simplicity. The lyrics, written by Liv herself, are beautiful: thoughtful, insightful, and expressive. They are honest. Liv's voice in Skintight leaves behind the drama of Leaves' Eyes; there is a pureness to it that I really enjoyed. Backing vocals are kept simple and minimal, and I found that a really cool thing to hear because I am so used to complex harmonies & backing vocals in LE.

I find myself quite haunted by this CD and I've barely been able to stop playing it since I got it in the mail last week (the same day that Loreena McKennitt's new CD arrived; another amazing disc that has been competing with Liv for play time here at home). Songs that I particularly love and find resonant are "Skintight", "Twofold" and "Wonders." The closing track, "The Rarest Flower" is also lovely.
This is definitely a CD to be savoured over and over again. Awesome job, Liv. Horns up. \m/
Posted by Allyson at Sunday, December 12, 2010