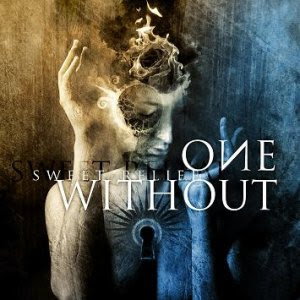 I stumbled upon a pretty nifty metal blog recently called Black Wind Metal, and since reading it, I've got a running list of bands I need to check out. After reading this review of Swedish metalers' One Without's release, Sweet Relief, I was intrigued enough to check them out, the prospect made even more appealing by the availability of a free download on the band's site and their Last.fm page.
This band has been around for quite a while in various incarnations since 2003, and Sweet Release is their fourth release.
I listened to the album for the first time yesterday after spending a considerable amount of time with Amaranthe, and my perception of it might have been coloured at the time because I had listened to too many growling male vocals already and I was starting to get a headache. Overall, my first impression was that it wasn't my cup of tea, mainly because of all the growling.
Upon a second listen, my impression hasn't changed much. There are a lot of pluses going on in this album for sure. Musically, it's aggressive, heavy, and tight. The compositions aren't bad and there is some great guitar work along with some cool synth elements I kind of liked. The pace of the individual songs was good.
The intros to their songs are all very strong, and the opening track, "Hunger" is a great example of this.
But after the intros I found things lacking. Apart from the growls, I didn't find female vocalist Catrin Feymark's vocals really captured my heart or imagination. She doesn't have a lot of range and the songs all to me had a monotonous sound to them because of this. While I don't think she's a bad vocalist, once again, I feel that here is a metal band with a female singer not suited well for the music. Because of her lack of vocal chops (at least evidenced in this release), the songs eventually wound up sounding the same to me after a while. This is a shame because there is a lot of heavy shit in here and some really strong elements. Stronger songs are the aforementioned "Hunger" and "Pretender."
What's unusual about this album is its length: it contains 17 songs. As Space Kev said in his review, it was a tad long and some of it could have been cut out and released in another form. I agree with this assessment. Because of the sameness I felt pervaded all the songs, this was a bit of a slog to listen to, and by the second half I started to find myself bored and waiting for the end.
So, my overall feeling about this album is that it was just OK but not my cup of tea. I'm always open to listening to new stuff though and discovering new bands, so I appreciated Space Kev's review of Sweet Relief and the downloadability of the release.
Here is One Without's video for "Pretender" which was just released today.
Posted by Allyson at Saturday, May 07, 2011

A very good review! I think I may tend to agree with your take a bit more than Kevin's, personally.

I'm glad that you've collected some recommendations from our site, it means that we're accomplishing what we've set out to do! :D

Like Amaranthe, I am not impressed with this Swedish metal group either.

One Without's previous album "Thoughts of a Secluded Mind" is not quite as heavy and has far less growling, making Catrin's vocals much more enjoyable. Personally, I absolutely love Catrin's low key voice. There's an almost sultry quality to it, and I think she has a very unique sound, comparable perhaps to Judith Rijnveld of Kingfisher Sky .

The big problem with the new album is that every time we get to one of Catrin's stronger vocal passages, she gets drowned out by another growl! I was very bummed out for days after listening to Sweet Relief. I started up the first track, anxiously awaiting the first sounds of Catrin's sweet voice, and instead I got blasted by a big grunt!

Check out "Thoughts of a Secluded Mind", it made me fall in love with One Without and also Catrin's wonderful voice.

I'll have to make a point of checking out their previous album so I can compare.

I like your review, and upon reflection and comparison to mine, a little bit more in depth and insightful. I still really like this cd though.