Crimfall's "The Writ of Sword" 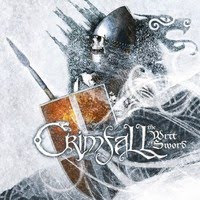 All the credit goes to Eric for finding this band and introducing me to them! I have loved Crimfall from the first listen to the first song on their debut album As the Path Unfolds... and I waited very patiently for a a couple of years for them to release a follow-up. And, in March, they did so.

Crimfall exemplifies for me the best that the viking/folk metal genre has to offer. Their stuff is big, epic, heavy as hell, atmospheric, and utterly haunting. As the Path Unfolds...was a very mature-sounding album for a debut. The music, the orchestrations, the choir - everything - was just top notch. It was impressive.

The final song on that album was a in acoustic piece called "Novembré", and The Writ of Sword picks up where As the Path Unfolds...left off, with an instrumental prologue entitled "Dicembré." It features some ominous sound effects that immediately put the listener in the setting of the album: the cold, desolate, northern landscapes of the Vikings. There is a nice echo in here of the acoustic guitar melody in "Novembré" which I thought was a good touch.

From there, we go into the completely phenominal "Storm Before the Calm", a track with a bombastic, bassy beginning with tons of balls. It's definitely one of the highlights of the album. We also hear that male lead vocalist Mikko Häkkinen has changed his style slightly from the previous album. In As the Path Unfolds..., he had a higher-pitched growl. It wasn't unlike a black metal shriek, but not quite. In The Writ of Sword, he's growling more like you're used to hearing in death metal. I'm not the biggest fan of growling, as you might know, but it works for me with Crimfall. Maybe because it's well-balanced with the powerful, bright vocals of female lead Helena Haaparanta, who remains to this day, in my opinion, one of the most underrated female vocalists in metal.

Anyway, at almost 6 minutes in length and with a ton of stuff going on in it, "Storm Before the Calm" demonstrates once more how adept they are at creating complex, progressive tunes.

The third track, "Frost Upon Their Graves", was released for streaming before the CD on the band's MySpace page, and once again, Helena shows her vocal prowess with a folky vocal intro akin to what she did in "Wildfire Season" from As the Path Unfolds...

These two first vocal pieces set the stage for the power, complexity, and outstanding song-writing this album contains. It doesn't let up. Lyrically, these songs form quite the chilly, moody, and desolate narrative, and to add to the atmosphere there are lots of sound effects like the clashing of swords and battle cries, for instance, that add to the overall soundtrack-ish quality to the CD. Additionally, the folk elements, like the cello, violin, accordion, and harp all contribute towards making The Writ of Sword sweeping and theatrical. Of the 9 tracks, a full 3 are instrumental. "Geađgái" is amazing, pure and simple. 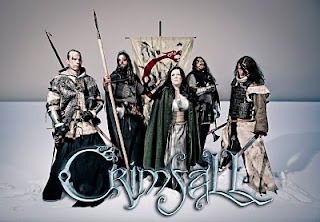 Can you tell that I love it?

I do have a couple of faily minor critiques, however. One is that there's not enough Helena! There can never be enough Helena! But in all seriousness, my perception even after many listens is that there is less of her on this CD than there was on the last one.

The other kind of negative but, admittedly, nitpicky thing I didn't like was the font the lyrics andcredits are printed in in the CD booklet. First of all, the font is tiny and hard to read, but this is compounded by the fact that the print is all in one of those cool-to-look-at but totally impractical Olde English-esque typesets that can be barely legible. I had a hell of a time with it.

One interesting note: you might recognize the voice of the priest in the title track, "The Writ of Sword." It's Tapio Wilska, who also guest starred in two tracks on Nightwish's Oceanborn's "Devil and the Deep Dark Ocean" and "Pharaoh Sails to Orion," and in "10th man Down."

All in all, awesome release from Crimfall, and I hope with their new record deal with Spinefarm Records that they'll get a lot more exposure. Horns up! \m/