Finally, we have some new info about the long awaited Nightwish's film Imaginaerum. According to nightwish.com, the world premiere  will be at Hartwall Arena, Helsinki, Finland, on November 10, 2012. Screening of the film will be preceded by a show by Nightwish themselves. Finnish theatrical release is set to be on November 23, 2012. As of now, we have to wait for further announcement if the film will have theatrical release in other countries than Finland.

Also you can already pre-order  the official soundtrack of the film 'Imaginaerum by Nightwish - The Score'.

Here are some soundtrack samples:

Come Cover Me: Evenoire does Within Temptation's "Somewhere"

Evenoire is one of the many fantastic Italian bands I've been talking about recently here, and today they posted a YT video of a live version of their cover of Within Temptation's "Somewhere."  It's a lovely duet (not sure who the other singer is, but Lisy, Evenoire's vocalist, is the first singer you hear) accompanied only by the acoustic guitar.

Here is the original, by WT.


And here is Evenoire's version.  Enjoy!

Yes, I went to see Agalloch a month ago.  Why have I not written about this sooner?  Well, it's been a trying summer for me and I'm behind with everything.  Obviously, it would be ideal for me to have written this closer to the time it happened rather than a month later, with things fresh in my mind, but alas, sometimes that doesn't always happen.

I went to this gig, at the Rickshaw, which is located in BC's most infamous neighbourhood, the DTES, quite spontaneously.  I didn't find out they were even playing until the Monday evening before, and I knew I had plans for early Saturday morning.  I was not keen on getting home by transit at 2am and then having to get up for another event only a matter of hours later.  But I was really wanting to see Agalloch, since I know they don't tour much.  I'm not even a huge Agalloch fan, but I have a friend who is and I know she adores them, and has even followed them around on mini tours in the EU.  This was a show that might be a one and only occurrence for me, and she encouraged me to go.  So, as my roommate packed up to go for a date, I prepared myself to go to the gig, alone, in the DTES.  It was a bit of a ride on the wild side, considering the transit trip home and the event next day.  But what the hell?  I had nothing better to do, the cover was $20, and I thought it would be a good experience.

And it was...an experience.  I walked through the DTES alone, something that isn't generally recommended, and got to the gig at 8:45.  I wasn't familiar with either opening act, the first being a band called Eight Bells, and the second being called Taurus.  Both were bands from from Portland, Oregon, where Agalloch is from.

In fact, these two bands turned out to be one of the most interesting parts of the evening.  Both are female fronted; in fact, Taurus is a female duo.  While neither plays my cup of tea musically, I was impressed with them both live.  Granted I came to the gig late and missed most of Eight Bells' set, but as soon as I sat myself down and started listening, I regretted not coming earlier.

But Taurus stole the evening for me.  They play a type of metal I am not into at all, sludgy, drony stuff that didn't seem to me to have much rhyme or reason, and very little in terms of vocals.  Basically, we have a guitarist and a drummer, and some electronic thingy making the vocals all echoey.  But the thing about it was that their set, which consisted of the two tracks from their EP Life (which I wound up buying eventually), included not only a visual component comprised of a silent video show on a screen to the side of the stage, but the music was bookended with a voice over narration featuring a guy named John Cage, apparently a composer of some distinction I'd never heard of before.  Well, I know who he is now.  The speaking parts in Taurus's set can be heard in this YouTube video, and when combined with the music of Taurus, I had quite the transforming experience.  The narrative by Cage provided a lot of context for me, and it really made the music make sense to me, whereas, had it been just on its own, I think I would  have been lost.  But I found the set quite mesmerizing.  I was really impressed by the sophistication and power of this band, and I appreciate that I was introduced to another metal subgenre in such an enjoyable way.

Agalloch came on stage at about 10:20.  This is where things get a bit weird.  The Rickshaw, I found out later on FB, was trying out there new fog machine that night (along with some new lighting, which was cool), but also, Agalloch is apparently into incense - big time.  When they were set up, a guy (who turned out to be lead singer & guitarist John Haughm) came onto stage with a bunch of stuff I couldn't recongnize, but I thought it at first to be candles.  I thought maybe he was setting up an altar or something.  But no, it was, it turned out, two very large pyres of incense.  Now, for reasons I don't know, the Rickshaw had curtained off about 2/3 of the seating in the theatre and there was only a narrow curtained hallway to enter and exit the gig space from.  The gig was very well-attended with a good 200+ people there, but we were all crammed into a very small space.  When I was there last for the Arkona/Korpiklaani gig in December, all of the seating was available and there were two entrances/exits.  It was as hot night, but if they were hoping to save on A/C I don't know how effective just curtaining off extra seating was.  But what I can say is that the air quality in the room was absolutely awful.  The new fog machine combined with the incense, plus all the humanity, plus the stench of booze and pot...the air was like a heavy stew you could slurp up and chew.  It was terrible.  And it really affected my enjoyment of the gig.

Agalloch's music was great to listen to live.  I'd heard some of their studio work, but their live performance was much more engaging and emotional.  Lead guitarist Don Anderson was very animated, and the bass player, Jason Walton, was also interesting to watch. 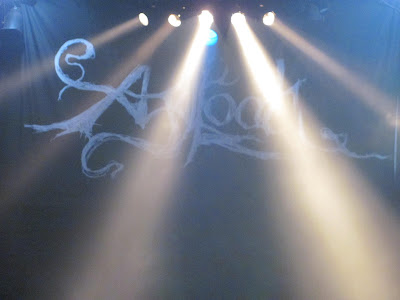 As I said the gig was well-attended, and it seemed to me to have an older, more mature crowd than I'm used to seeing at these things.  Previous gigs I've attended have included a lot of 19 year olds in odd make-up and dressed in scene kid type clothing.  This crowd was there for Agalloch and they obviously knew the band well and appreciated the show.  There was one woman there dressed in a skimpy dress, 5" stilettos, and a mink stole (of all things!) and one over the top metal chick who texted on her cell all night in a chair not far from mine, but other than that, the people watching wasn't that interesting.

I couldn't stay until the bitter end because I had to make sure I caught a certain bus home.  It turned out to be a very interesting transit ride home, but that is a story for another time.

I am very glad I went to the gig.  I had a good time even though I was by myself.  I had the delightful surprise of discovering two new female fronted bands, and I enjoyed Agalloch a lot.

Next up at the Rickshaw is Korpiklaani - again! this will be their 2nd headlining show in Vancouver in less than a year - WTF? - supported by Tyr.  I am going to go and see Tyr (Korpiklaani doesn't do much for me but I really like Tyr) on Sept. 9, and then on Sept. 21 Swallow the Sun is supporting Kreator.  I just hope the Rickshaw sorts out its air quality issues.  That was very unpleasant, but then again, I don't think Korpiklaani or Tyr or these other bands are known for their incense use.

The full Flickr set - such as it is; I don't have a fancy camera that takes good pics in these dim environments - is here.
Posted by Allyson at Sunday, August 12, 2012 No comments: It's been approximately one year or so since I started reviewing for two metal web zines, Sonic Cathedral and Black Wind Metal.  The promo materials are ridiculous.  I haven't had to buy or download as much as I used to, which is great.  One of the big surprises for  me in the past year is the shear amount of metal coming out of that country mainly known for Lacuna Coil, Italy.  Italy is, I think, the new powerhouse of metal.  Here is a list of bands I've discovered in the past year that  have come from there.

That's 14 freaking bands I alone have come across - and there will be more, I guarantee you!  This is by no means a complete list of Italian bands.  I'm only trying to demonstrate how many I have discovered myself in one year alone.

If you have any recommendations for me, leave them in the comments!
Posted by Allyson at Wednesday, August 08, 2012 No comments: