What can I say about Leaves' Eyes and my love for this band? Not enough. Following their evolution from their debut, Lovelorn, through to their newest release, Meredead, is pretty epic, and I can only say that the movers & shakers behind this band, vocalist, composer and lyricist Liv Kristine and composer, harsh vocalist, composer, and producer Alexander Krull (Liv's husband), and their knack for producing lush, rich soundscapes accompanied by lovely, evocative imagery and storytelling only gets better and better with each album they do. Meredead is a tour de force in epic Nordic folk metal and a huge leap forward in the evolution of Leaves' Eyes' sound. This album sees LE make the jump from Nordic folk-inspired metal to full-on folk metal - and it is fantastically executed on every level. Meredead is heavy, folky, and more gorgeous in sound than any of their previous CDs.
From the opening rat-a-tat-tat of an almost military-sounding drum beat in the first song, "Spirits' Masquerade" the listener is transported to a magical place everyone who digs this kind of metal only hopes exists in the afterlife. Based mostly on Viking and Norwegian folklore, with a bit of Irish thrown in for good measure, Liv Kristine herself puts it best when describing the landscape of Meredead: "Sometimes you will hear about men going on adventures, some ending up drowning in the sea, their wives, evil witches, three-headed trolls, or spell-bound princesses, as well as marble halls and blood-thirsty creatures."

I use this quote by Liv also because five out of the 11 sung songs (the twelfth,"Veritas", is pretty much an instrumental with a bit of non-lyric vocalizing) are written in languages other than English, so I cannot properly verify what they are about. If you have the bonus track "Sorhleod" you get a13th song, and it's also not English. Liv took it upon herself to write some lyrics in Olde English (the title track, "Meredead," for instance, which translates into "dead by/in the sea,"or "the mortal or killing sea", according to Liv) and I believe the bonus track "Sorhleod" is also in Old English (correct me if I'm wrong). There are songs sung in Norwegian, including two traditional tunes, "Nystev" and "Kråkevisa."
Adding to the mystical atmosphere of Meredead are a host of folky instruments like the uilleann pipes, a traditional Norwegian instrument called a nyckelharpa, the mandoline, the baroque guitar, the fiddle, and whistles. There is also a lot of choir work and on several songs guest vocalists appear (Anette Guldbrandsen appears on 5 tracks, and Maite Itoiz appears in two), and the vocal harmonies combined with Liv's amazing voice are beautiful.
One of the big improvements overall that I heard on this album was the speed of the songs. LE previously leaned towards slower, more "doomy"-sounding songs with not a lot of gallopping tempos. Meredead is has a lot of speed to it, and I really enjoyed that change very much. 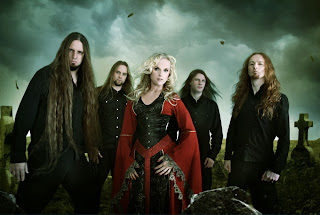 There are so many stand-out songs here, but ones that stuck out to me as particularly awesome were "Étain", which the wannabe Celt in me really appreciated, the traditional Norwegian song, "Kråkevisa", "Nystev" and the over 8-minute long "Sirglinn" on which Liv's sister, Carmen Espanæs, vocalist for Midnattsol, makes a guest appearance.
Low on weaknesses in general, my typical beef with LE does apply here: Alex's growls. As I said in my review of Melusine, I totally respect Alex's work, but his growls are just not my cup of tea. Luckily, they are not all over the place in this CD.
And as usual, the album art is amazing. The booklet is beautiful to look at.
So, this rates a double horns up from this reviewer. Well done, Leaves' Eyes! \m/ \m/
Edit May 22: God, writing and then editing this post made me hate Blogger even more than I already do. I am seriously considering moving this little project over to WordPress where the platform is 10000000% better and easier to work with...
Posted by Allyson at Saturday, May 21, 2011