CD Review: Within Temptation's "The Unforgiving" 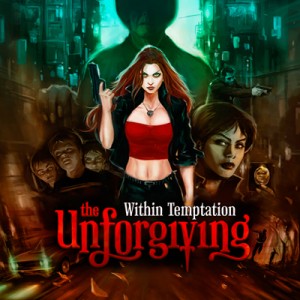 After so much hype and so much promotion, finally, Within Temptation's The Unforgiving is in stores - if you're in Europe. If you're anywhere else, you're SOL. Unless you have the internet, then you can download a leaked copy, which is exactly what I did yesterday. To be clear, I have ordered the physical CD, but I won't get it until May, when the new Leaves' Eyes is released; this is because I combined a bunch of orders together to save shipping costs. I just couldn't wait to hear this after all the previews that have been posted on YouTube, Facebook, and WT's site.

My gut reaction right off the top: FUCKING AMAZING! I am so impressed and thrilled I barely know where to start and what to say. WT has said from the star that this release would sound very different from all their previous stuff, and very different it is indeed. The Unforgiving shows a definite evolution in the band's sound. It's faster than anything before, for one thing. You can hear the influence of 80s and 90s sountrack music in it, which I love because I have always loved rockin' soundtrack tunes. There are a lot of symphonic elements in the songs, which are woven in so seamlessly and so deftly you might you cannot compare them to the symphonic elements to previous WT CD's at all. Sharon den Adel's voice is also a big change here; she's very powerful, and I can tell that she is utilizing a completely different vocal style than she has before. She's a rock belter in this case, and it works so well, reminding me somewhat of Heart's Ann Wilson. In a way, too, this album has a much heavier overall sound. Before, I wondered why they had a second guitarist; he never seemed to add much to the sound and at times I wondered why they even had him - he was barely evident in most songs. The music The Unforgiving makes full use of their rhythm guitarist, Robert Westerholt; his parts are more discernable and add a richness to the band's sound and vibe. Lead guitarist, Rudd Jolie, gets way meatier material and there are some great solos to be heard on this album.

The Unforgiving is a concept album based on a comic book written by Steven O'Connell and illustrated by Romano Molenaar. Accompanying the comic book are a series of short films that play into the concept. The first one, Mother Maiden, introduces us to some of the characters and gives some insight into the overall plot. It also includes the video to "Faster", the album's first single - unedited as opposed to the official "Faster" video which had to be dumbed down for those with shorter attention spans. Upon watching this first short film, "Faster" took on new meaning for me, and I started making connections already as I had just seen the second short film, Sinéad, a few minutes previously. The music video for "Sinéad" of course tells more of the story.

All in all, as an experience, this is great shit! There is an epic background story with a discernable plot (Tobias Sammet, take notes here; your concepts are shite in comparison) and when you see all the parts combining into a whole through the videos, mixed with the music, The Unforgiving is pure win in terms of overall concept, vision, and writing. I used the word "experience" pointedly; that's what putting all these pieces together creates, and I am loving it to bits.

My personal favourites on the CD are "Faster"; "Sinéad", which has as cool club music feel in the background, which makes sense if you watch the video; "Where is the Edge" which was made into this music video for the Dutch movie Me & Mr Jones; and "In the Middle of the Night". But honestly, there isn't a weak song on this album at all, IMHO.

I can't say enough positive things about The Unforgiving. I can't wait for my CD to arrive in the mail; I I have the special edition coming, which includes a DVD with a bunch of videos. So excited! I hope WT comes to a bigger centre in western Canada because they are another band on my bucket list I'd kill to see live!
Posted by Allyson at Friday, March 25, 2011

Nice review though you got the guitarists mixed up: Ruud Jolie is their lead guitarist and did all the solos, Robert Westerholt is the rhythm guitarist.

Thanks for that! I just edited the post with the right info.

No problem :-) I know what you mean about wondering why they need two guitarists because when you listen to their recorded material (including the live albums) the guitars are often buried in the mix, mainly because they clash with the orchestra string section. But live they are a much heavier, far more guitar driven band.

Interesting. I have loved all the live performance videos I've seen of theirs on YT, and I have Black Symphony, which is awesome. I definitely want to see these guys live one day!

Great review. I agree this is superb good album and the sound fits this band very well as well.