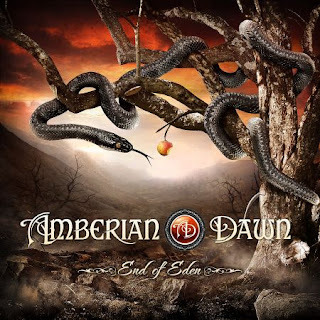 Being a huge Amberian Dawn fan, I was highly anticipating the release of their third CD, End of Eden. I have no idea when the North American release is coming out and it isn't as yet available on Canada's iTunes store. I hope we get it sooner or later! I hate it when we get stuff so much later than the rest of the planet!

The other big news around this album is the guest appearance by Stratovarius keyboardist Jens Johansson for a much-touted keyboard "battle" between Jens and AD keyboardist and main man Tuomas Seppälä. Additionally, Finnish male opera singer Markus Nieminen also makes an appearance.

My first impression of this CD was that I didn't think it lived up to it's hype. However, after listening to it several more times, I have amended that opinion. While I think there are some songs on here that seem like the same old AD we've been used to for a while now, there are some impressive aspsects going on that took a much more concerted listen to fully appreciate.

This is a faster album with a more complex sound to it than River of Tuoni and Clouds of Northland Thunder. Heidi's voice remains perfect, but it also seems to have grown in range, too. There are more symphonic elements present in End of Eden, including some nice choir arrangements that add atmosphere. There is a much darker, Gothic kind of feel to this CD than I perceived were on the previous two albums, yet this is still symphonic power metal through and through. I think the compositions are also more complex, showing some growth on the part of the songwriters.

Definitely the highlights on this release are the entirely classical piece, where Markus Nieminen guests, "Virvatulen Laulu", and the Jens Johanssen track, "War in Heaven." "Virvatulen Laulu" is pure beauty & classical bliss; Heidi sounds her best here for sure and the composition is amazing even though I don't understand what is going on in the song because of the language barrier. "War in Heaven" is AD's longest and most epic song to date, and the keyboard battle is certainly nice to listen to. I'm very glad to see an epicly long song from AD at last; I've always thought they were epic-sounding but I have yearned for them to produce a long, epic song to show off their epicness. They do it here.

Another highlight is the song that was released as the CD's first single, and the first video to come from the album, "Arctica." Fast, intricate, and a treat to the ears.

My only real criticism gets back to song length. Again, apart from "War in Heaven", the songs are all comparatively short, and though well-composed, there is a touch of "Amberian Dawn formula" here. They seem to have a safety zone for themselves, and I found myself wishing they'd break out of that a bit with End of Eden. While I certainly do hear growth, I'm not sure I'm preceiving any big risks being taken, or any move towards more of an evolution of the band's overall sound.

Still, definitely a horns up from me, because this is a great album to listen to, and shit, I'd listen to Heidi sing "Twinkle Twinkle Little Star" and other annoying nursery songs over and over again because she is just so delightful to my ears!

Here is "Arctica" for you to listen to. Enjoy!

Great review! So far, this appears to be their best album. "Arctica" is a good song. I liked the Neo-classical metal stuff in that. But damn, that video is not very good.. lol! But the music is what matters of course! :D

Since NW dropped Tarja, I think AD has picked up where NW left off as far as being the front runner for female-fronted metal with classical vocals (since NW abandoned the classical vocal style). These guys really do have a bright future ahead of them if they keep improving like this that is for sure!

OK, I have listened to this two more times since writing this review...

Man, I have to take back some of my criticisms now because the more I listen to this the more I realize that this is ass-kicking metal for sure...

What was I thinking? I feel I should post an apology because I'm feeling very guilty...

Hehe, we were both reacting very similarly! At first listen I was quite disoriented and even wondered about the sound which seemed mushy to me ... I thought the songs were pretty weird rhythmically and not exactly catchy, and was also disappointed that some elements I liked about the older albums (for example, harmonised guitar solos) seemed to be absent - Heidi's voice sounding a bit strange - and wished that the songs were longer! I was like "damn Tuomas, why don't you write longer songs! And what's up with that line in War in Heaven that keeps repeating ...".

But then, with every spin, I liked the album more and more. The compositions are, as you have said, more complex, and the (neo-)classical elements have increased, along with the symphonic elements. One thing I was reminded of more than anything else is Sonata Arctica's "Unia", but "End of Eden" is a less radical change in style and retains the old elements, gladly. Amberian Dawn have truly progressed from album to album. They have undergone evolution rather than revolution, so their development is subtler, but it IS development. End of Eden is still incredibly melodic, speedy, and full of beautiful melodies.

At first listen I wasn't very caught with it either tbh.. and I'm probably like #2 biggest AD fan (I have to give number 1 to Emilie who has gone above and beyond in attending almost every show of theirs and making sites for them).

I noticed after a first listen though I had a melody of some song stuck in my head and I wasn't sure which, so I had to go back in for another listen.

Overall I like the album a lot.. Virvatulen Laulu is a definite favorite and I hope AD will explore a bit more into this aspect of their potential as well (as in maybe another song like this on their next album, Tuomas has already written 3 more songs!)

Anyway great stuff in this album overall and I do agree that Heidi's voice has improved (not that it was bad before mind you).. it just seems to be clearer and brighter than before :)

@ ROCxolan: sorry for the late response here, but for some reason I didn't see your comment until now! Thanks for commenting, and I agree with all you said!

Anex: welcome & thanks for the comment! The more I listen to "Virvatulen Laulu" the more I just love it. I hope they do more of this, too, because it's so brilliant and it really shows off Tuomas's versatility as a songwriter. It's just so impressive.

I also found on Facebook yesterday an instrumental piece that was a bonus track on the Japanese release of River of Tuoni, "Dreamchaser." If you follow them on FB you've probably seen it.

Anyway, I LOVE this piece! I'd like to see more of this kind of stuff, too.

I believe I am a member of that forum, actually, but I'm a little A) busy and B) I had such a bad experience on the MFF forum I'm reluctant to get back into forums. Not that every forum is going to be like the one of MFF (I hope!) but it still left a bad taste in my mouth about fora in general. What is the AD crowd there like?