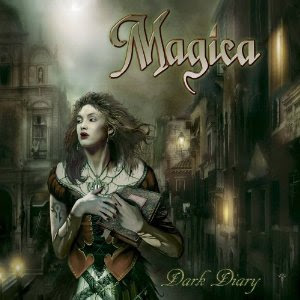 When I used to think of Romania, I'd go back to my teen years when news of the fall of communism & Nicolae Ceauşescu was in the news, and to when pictures of babies in Romanian orphanages, most of them ill and poorly cared for, made me sick to my stomach. After that, I remember lots of stories about these Romanian orphans who were adopted to Canadian couples and had terrible psychological issues as they grew up.

Magica came into my life a couple of years ago, and kind of wiped away the gloomy impression I previously held of Romania. Right from the start, I enjoyed this power metal band's fast, well-crafted music. I love Ana Mladinovici's voice, and I love the folklore themes of their albums. They have a great cast of musicians, including this wicked keyboardist called Six Fingers and a killer guitarist named Bogdan ‘Bat’ Costea.
Though I found their music strong and enjoyable, there was kind of an unpolished element to it, and I always felt that Magica was just missing out on some small level of sophistication that was keeping them from being truly magnificent. But I always had faith!
Enter Dark Diary, the band's most recent release. Right from the beginning of the first song, I was blown away. I could tell from the start that Magica had finally arrived as a power metal powerhouse. And I was thrilled!
The album opener, "Anywhere but Home" starts out with a thrashy intro, setting the pace and atmosphere for the whole album. The guitar work here and in all the songs is astounding, and the vast improvement in the band's songwriting is evident not only in this first song, but throughout. There is no filler in this release at all; all of the songs, in my opinon, are strong. "Anywhere but Home" is heavy, powerful, and really catchy. In fact, the catchiness of most of the songs on this CD is one of the things that stood out to me. Magica proves you can write hooky choruses without sounding cheesy, limp, and pop-like.
Other strong songs include "Tonight", "Wait for Me", and a song with an interesting 90s kind of feel to it entitled "On the Side of Evil." This is a really fun song for those of us who remember 90s rock really well, though make no mistake, despite it's retro-ness, this is still a metal song. In three songs, Magica utilizes a male back-up vocalist, which I very much enjoyed and found strengthened the overall sound of the album.
I have two main criticisms of Dark Diary. The first one is the mix; Ana's vocals seemed to get lost in the heaviness of the bass, lead & rhythm guitars, and there is a fuzzy kind of sound in some songs where I think they are trying to be more thrashy. Secondly, they totally under-utilized Six Fingers! The keyboards have really been relegated to the background, except in the lovely Ana-Six Fingers duet, "Dead Diary", which is less than two minutes long. I found this really disappointing because the keys were always something I admired about Magica's sound.
But all in all, this is Magica's best release in their discography and I am very happy for them. This is pure power metal awesomeness and it gets a huge horns up from me! \m/

Here is "Anywhere but Home" for you to enjoy.

Great review! I agree, this is their best work to date.

Indeed one of their best albums. But it still misses something in my opinion..