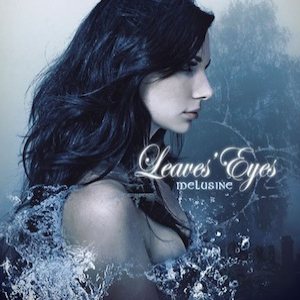 I am a HUGE Leaves' Eyes fan, and I have always loved their EPs.  They usually have great bonus material on them and have always, in my opinion anyway, been well worth the bucks.  So I was pretty stoked to read that LE was releasing an EP around the same time as their new CD, Meredead (I will have a review of that upcoming when my copy eventually arrives in the mail from Amazon.ca).  Imagine how unstoked I was to hear that this EP was going to be some kind of exclusive release to European fans (mainly German!) who bought the May edition of a German music magazine called Sonic Seducer.  Thank God Eneas of Knights of the Temple had a link to a downloadable version.
What initially excited me about this was not only the non-album track Melusine (because often LE saves their best for their EPs) but also the acoustic version of one of my favourite LE songs, "Legend Land."

Well, I have listened to Melusine the EP and all I have to say is...how disappointing.  Apart from the acoustic "Legend Land", which was the strongest piece on the release and demonstrates how well LE does acoustic work as always, the rest of the songs were nothing to write home about.  "Melusine" the song was just not good.  Now, I have a lot of respect for Alex Krull as a musician and producer, but I have never been able to get behind his growls.  They are lame and I often think that LE's music would be better off without them.  In "Melusine" they are just bad, and combined with a rappy-sounding chorus that just didn't do it for me at all.

I cannot tell the difference between the two versions of "To France" that appear on both Meredead and Melusine, even though the Melusine one is described as a "sonic remix."  Similarly, the version of "Telltale Eyes" is almost identical to the version on Meredead. The remastered version of "The Battle of Maldon" also sounds very similar to the original.

So, I wouldn't spend the money on this as I have with previous EPs from Leaves' Eyes.  If you're a collector, that is one thing, but I am not.  The cover art is cool, though, but that's to be expected from this band!
Posted by Allyson at Sunday, May 08, 2011