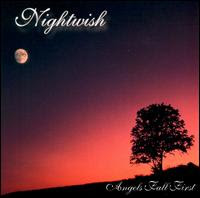 To celebrate one of my favorite metal bands, I have decided to review chronologically the discography of Nightwish. This band needs no introduction as they are perhaps one of the most unique bands of the last 15 years. They are also an inspiration to me in my creative thinking as well and doing a review series of this band is in a way a tribute to them and their music.

Nightwish's debut album was Angels Fall First in 1997. The band just signed to Spinefarm Records, which paved the way to many great Finnish metal acts. The world was ready to hear Nightwish, a very fresh and unique band with a female soprano named Tarja Turunen. At this point in time, seeing a classically trained operatic female singer in a metal band was almost unheard of at this point in time. 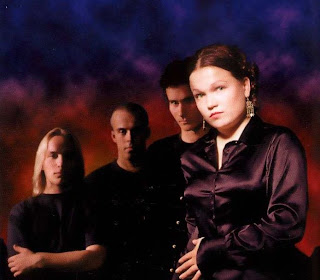 Musically, the band was inspired by a lot of the metal bands that were popular at the time, especially Stratovarius who was Finland's most popular band in 1997. Nightwish is led by Tuomas Holopanien as their keyboardist and composer. He writes most of the material for the band. At this point in time, Emppu Vuorinen was playing both guitar and bass guitar, leaving the group to have a session bassist while they performed live. Jukka Nevalainen is the drummer of Nightwish, and his input helped Nightwish achieve new heights as did the rest of the band.

So to review this album, I am going to do a track by track review:

2. "Beauty and the Beast"- A song obviously inspired by the Disney movie "Beauty and the Beast". It is very progressive in style, and has some very cool melodies and riffs, but the fall of this song is with Tuomas singing it. Tarja, however, comes through and saves this one. The live version with Tony Kakko from Sonata Arctica is better in my opinion. 4/5

3. "The Carpenter"- A song about Jesus with a middle eastern feel to it. This song was the single of Angels Fall First and I think this is one of the weaker songs on the album. For one, Tuomas' singing just flat out ruins it for me, no offense Tuomas, especially in the chorus. The song just does not do it for me at all. 2.5/5

4. "Astral Romance"- A great intro and a nice medium paced power metal song. The lyrics are very poetic and Tarja really gives a great performance again. However, during the bridge, Tuomas sings again! Oh no! So the song is really amazing, but Tuomas' singing knocks this song off one point. The 2001 remake with Tony Kakko is better. 4/5

5. "Angels Fall First"- The title track. A very nice acoustic guitar ballad with synth and Tarja's awesome and soothing voice. This one is underrated and demonstrates what Nightwish sounded like before they wanted to be a metal band. Very nice and an underrated song in the Nightwish discography. 5/5

6. "Tutankhamen"- A song about King Tutankhamen with a very interesting middle eastern feel to the song in the way the melodies were written. Tarja gives us a nice performance and the guitar and keyboard work very well in this song. It is a very cool song, despite the lyrics being a little cheesy, but hey this is a power metal song! ;) 4.5/5

7. "Nymphomaniac Fantasia"- Wow... This is a very different song. Apparently, Tuomas did write about some interesting subject matter that is very uncommon in a Nightwish song. "Deeper shall be the wound between your legs" Well that says it all. That explains why Tuomas hates this one! Even Tarja sings more aggressive and evil than she usually does. Not that great of a song, but it's uniqueness gets some points. 3/5

8. "Know Why the Nightingale Sings"- This song is my personal favorite on this album. The song has some great riffing and the singing by Tarja once again was very superb. The keyboard and guitar solos at the end are very well done and is some of the best Nightwish has to offer. Very cool. 5/5

9. "Lappi (Lapland)"- This song is divided into four parts. It can drag a little at times, but it has moments of greatness. Part one is pretty cool with the acoustic guitar doing some nice work along with Tarja and a flute accompaniment. Part two is mostly synth and drums, not much going on there. Part three has the heavier guitar ballad feel which the band would use as their formula for the future in ballads. Tarja shows her emotions in this one on the chorus. Part four is a nice track with Tarja using her classically trained voice accompanied by Emppu on the acoustic guitar and Tuomas with the synth backing. Overall, a very well thought out piece. 3.5/5

So there it is! The first album of Nightwish. Here is a little breakdown of what I thought:

Pros:
- Unique band and album with Tarja's classically trained voice.
- Catchy and good songs throughout.
- Keyboard and guitar work are some of the best Nightwish has to offer.
- Plenty of folksy elements that the band would not use later on.

So this was indeed a great start to Nightwish and in my opinion is Nightwish's most underrated album. Of course they would only improve over time with their next couple of albums. So the next review of Oceanborn will be coming up soon! Stay tuned.

Nice review, Eric. I like "The Carpenter" a lot, but yeah, they should get a guest singer to do Tuomas's part. I'd actually like to see them revive this song.

I like "Tutankhaman", too, but what always annoys me about that song is the last three notes on the synth - they sound like something from a cartoon!

i've never liked that album. Tuo doesn't count it as an album either but as a demo.

Well, I have heard Tuomas say it's "only a demo" but it still counts in their discography, and it was very key in their career (obviously). It's not my fave album, but it definitely got them off to a great start.

i just can't stand keys on that album and i have same problem with OB.

Demo my ass. AFF (and Oceanborn, too!) see Nightwish at their creative peak! And the keyboards are so much better than on the newer albums. AFF is really totally underrated. Especially the progressive songwriting not relying so much on catchy choruses but still being catchy. Beauty and the Beast is a sort of mini-drama, and you'll have more songs like this to come - really fitting in with the whole opera metal concept.

The talent of the band comes out best here when they were young and unexperienced and had few means, but as you know, necessity is the mother of invention.

When it comes to the songs, I have to go against the grain again and say that I like the mellow, acoustic songs best. Not only the wonderful title song (with a little synth/vocal drama added near the end to spice things up and Tarja's lovely lower voice), but also the stream-of-consciousness-like Nymphomaniac Fantasia (lyrics aside) that most probably was born out of hammering away on the piano and retains a unique ad-libbing quality, also reflected in the title (while still making sense) and the gorgeous, dreamy and wonderfully relaxing Lappi suite.

Besides "Erämaajärvi" with its beautiful Finnish lyrics, I really adore "Witchdrums", short as it may be, but my personal goosebump moment of the album comes in "This Moment Is Eternity" when Tarja sings "Land of raven, land of bear, land of eagle ...". So powerful and haunting. While Etiäinen wraps the tension arc up perfectly - it feels like coming back from a long journey, as at the end of any great epic. And the "acoustic synth metal" sound is THAT unique.

And BTW, I like "A Return to the Sea", as well. Even though Tuomas can't spell "Anomalocaris" (and can't inflect "thou", unlike Theatre of Tragedy). :P

Yep, when AFF goes metal, some of the riffs and solos belong to their finest ever.

Fun fact: Tuomas was originally inspired by Ulver's "Kveldssanger" for his acoustic project. Empyrium had been inspired by the same album. I actually get this AFF feeling sometimes when I listen to Empyrium in their neofolk phase. Coincidence? Perhaps not.

Give me AFF over CC, Once or DPP any day. It shaped my taste in music like little else back in the day.

I agree, I do not believe AFF was a demo at all either! LOL. In fact, I think it was one of NW's best releases. It wasn't perfect, but I like how "raw" it sounded, despite the production being a little off. It was indeed a great start to a great band.

Don't like the keys eh? Well, that was the main source of NW's old sound besides Tarja's vox. But then again, everyone has their own tastes and styles.

BTW, a friend pointed out that for example in the "Gethsemane" intro, the synthetic piano sound fits better in with the electric guitar than a real piano sound would have. A real piano isn't ALWAYS better than a synthesised one!

It's the best Nightwish album in my opinion, it shows you don't have to have speed metal throughout every song. Tarja's voice is shown in a different tone as it's not drown out by heavy guitars...At the end of the day Nightwish lost everything when they threw Tarja out of the band, she was why they were so special to begin with!