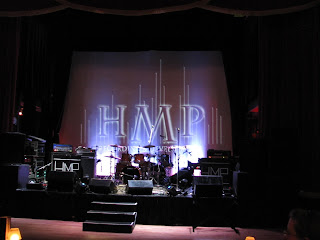 Earlier this month, on the 4th of June, I was invited to the HMP Recording and Development's showcase tour when it stopped in Vancouver's suburb of New Westminster. This cross Canada tour, which had a western leg and an eastern leg and literally went from one coast to another, showcased some of the talent this young and up-and-coming record label has to offer.  You can read more about HMP here; they are a Vancouver-based company with acts from all over Canada signed to them, with a large variety of music: metal, rock, pop, country, and even hip hop. I was grateful to get on the guest list so I could feast my ears on (mostly) new-to-me music.

There were 10 acts altogether, and New West's Columbia Theatre was abuzz with activity when I arrived and took my seat. Artists were to-ing and fro-ing all over the place, the door to the back stage and green rooms was in constant motion, and there was a big sound check going on, led by rock band JFR's front man, Jean-Francois Roy.

The showcase's co-headliner featured Edmonton industrial metal act KingDoom, which had a special guest playing with them for the western leg of the tour, Chris Vrenna.  Vrenna, if you don't know, was Nine Inch Nails' drummer and also drummer for Marilyn Manson, and he's also a producer, who actually produced KingDoom's new self-titled CD.  Apparently, he's a grammy winner.

But the big draw for me personally was seeing a band I've become quite fond of recently, Celestial Ruin, who signed with HMP in the late spring.

But before we get to that, let's go through the line-up and give some link love to the other bands on the night's bill.

The evening was emceed by Fall of Cain mainman Travis Dean, who was charismatic and very enthusiastic as he cruised through the evening introducing everyone.

First up, a metal guitar soloist, Draaka Rouge, who hails from Victoria, BC, and who plays his own unique brand of progressive metal. His guitar playing was extremely impressive; his hand was a constant blur as he shredded it up!  He also had a very cool guitar, it reminded me of a Ferrari, bright red and shiny.

Next up was Vancouver hip hop artist Stray One, from Vancouver suburb, Langley.  AKA Nicholas James Bergeron, he performed a couple of songs (all the sets were very short leading up to the headliners) that were OK as far as I could tell - I am not a hip hop person at all, but I liked his subject matter.

Third was rock artist Joelle, who has a new album out called "Pillar of Stone", and fourth up was another rock act called Burning Daisy, featuring an Irish-born singer named Liz. I really liked this band a lot, be sure to check them out! 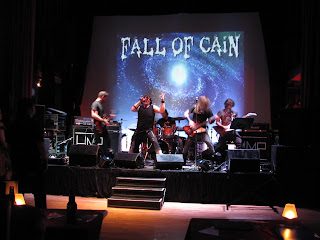 At the midway point of the evening, Travis went through costume change to sing for his band, Fall of Cain (their HMP page is here). Hailing from Victoria, this band sits somewhere between hard rock and heavy metal on the musical spectrum, and had lots of great stage presence.  Travis was a great performer and wore these funky steampunk-ish sunglasses.  This is definitely a band to be on the lookout for, they were excellent!

Following Fall of Cain, Jean-Francois got up to perform with his band, the HMP showcases house band, JFR. Based in Edmonton, this is another band to watch out for - they were great live and did a fantastic set.  They even have a music video out for one of their singles, "Take Me As I Am."

The seventh band was a last minute addition to the bill, a Vancouver-based band called Crashing Angels.  OK, this band actually surprised me.  Never heard of them, and when they were doing their set-up, I could tell that they were significantly older than all the other bands playing.  I was a little skeptical, when I saw them, expecting perhaps something more traditional and perhaps blander than what I got, which was an excellent set of hard rock!  Vocalist Dean Marshall Pilkey was purely awesome - he just killed it, and this was one of my favourite performances of the night!  This band has had the same line-up for 11 years, incidentally, and I'm going to have to see if I can catch them live again because I enjoyed them that much.

After a bit of an intermission, the three big bands were up next, starting off with KingDoom, accompanied by Chris Vrenna on a second drum kit. He was the big name "draw" of the night, and indeed the western leg of the tour.  KingDoom live was amazing, not ifs ands or buts. They were tight, intense, and you could tell that they'd worked a lot on their live performance because they looked and sounded very slick and well-produced.  However, I didn't see the point of Chris Vrenna being there behind the second drum kit...he seemed a little extraneous, and he didn't look to me like he had a lot of heart while playing, especially compared to the band's main drummer, Boom-Boom (at least that's what their FB page says his name is).  Apparently KingDoom is popular on the Edmonton scene as their show was sold out in that city (and also of note, that Edmonton show was shown around the world on pay per view).  I really enjoyed KingDoom's set; it was fun and energetic, and I even liked them so much I purchased their CD off iTunes.  It's a pretty good CD, though industrial metal is not exactly my thing, but I enjoyed it a lot.  Singer Lex Justice is an excellent performer with a lot of energy and presence.  As headliner, they played a full set and it totally got the place going.

And then my favourite local metal band, Celestial Ruin was up to play a four song set.  I have previously written about Celestial Ruin for Sonic Cathedral, and you can read about that experience here. As I mention in that piece, CR is definitely a band to see live because their live performances are fantastic. Singer Larissa Dawn was once again resplendent in a gorgeous gown and she gave a very animated and compelling performance.  Their set included their own metal version of Europe's "The Final Countdown" and a song that is not on their debut album, Awakening, called "Sense of Exile". This show featured the band's new guitarist Carlo Sepe, who was just recently hired shortly after the Cirque Nocturna evening I linked to.  He did a great job, considering he'd been with the band less than two months and his first show with the band was on the tour's previous stop in Victoria the night before. The band's set once again had the audience up and headbanging and hopping around, and was a lot of fun. I totally encourage anyone in the Vancouver area to check out Celestial Ruin live if they can; their next gig is at the Media Club in downtown Vancouver on July 14.

Finally, after about three hours of music, the final act was on, and that was the aforementioned co-headliner, Poppy Seed.  As he took the stage, a couple of scantily clad dancers undulated down the two aisles of the theatre and took up spots right up in front of the stage and started dancing away to something obviously choreographed.  As I said, I'm not a hip hop person, and I have to be honest, this was not a good way to end the evening for me.  I didn't enjoy Poppy Seed at all and found him rather slow and boring.  It was late, and I had to skytrain back to my suburban lair, so I ended up leaving during this guy's set.  I feel slightly guilty about it...But I did get to have a last-minute chat with some of Celestial Ruin's members and that was nice.

So overall, this was a great evening of music and entertainment!  Thanks to HMP for inviting me, and thanks to all the bands and artists for a memorable evening.