CD review: The Unforgiving by Within Temptation

I know that Canuck already posted here her review but I will post my one as well. I must say that I agree in most of the things she wrote. Sharon sounds great! I read many comments bitching about the new direction of WT. But I absolutely don’t mind it. In my opinion the best what band can do is to try new things. Sometimes they fail but this is not a case for WT I reckon. They idea of an concept album was good after all. Also the orchestra fits in the songs very well. But I was like “here we go again” when I read, that there are at least 3 different releases of  the album. So I will wait some time, before I will buy this album. I don’t want to swear all over the place again if they release another "super deluxe version" after couple of months. And the cover? Well I was like wtf???? when I saw it for the first time. But as an album based on comic book series it is a logical consequence. 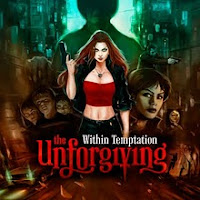 Why Not Me –  just a prologue.
Shot In the Dark – this one belongs to one of my favourites ones. Very nice opening track with catchy chorus and about 30 sec long guitar solo.
In the Middle of the Night – when I heard this track for the first time I was a bit confused. It reminded me of a dance band and not metal band with very long and diverse history. But since it was said many time, that The Unforgiving is going to be different I am not surprised with all the new elements of WT’s sound and I like them.
Faster – the first official track, but second I heard from the album. I like it very much. In my opinion this is a rock song and not metal. Anyway Sharon has stated many times, that they consider themselves “a symphonic rock band” so I have no probs at all with this song. Acutally I would love to hear it live one day. It has a lot of  energy. Love it!
Fire and Ice – one of the slower tracks. I wish they made this one only as an acoustic/orchestral piece. It would be very nice in my opinion.
Iron – I can’t help myself, but this one sounds to me as some kind of warrior’s song at least the chorus sounds so. Ready to take the weapons and start the fight. :D
Where Is the Edge – I heard it many times now so I skip it but it doesn’t mean that it is bad. I like the acoustic version which was already posted here.
Sinéad – this is my favourite of all! I love the feeling of this track and chorus of course. It lights up my mood anytime I hear it. Also I think that this one will be a blast live.
Lost – another slower piece. I like the graduation of this track and the acoustic opening. Another favourite track of mine.
Murder – I don’t know how they did it, but the chorus of most of the tracks are so catchy. And this one is not an exception either.
A Demon’s Fate – this one is missing on my list of favourite pieces. It’s too long and I got bored after first chorus. Another track with “long” guitar solo.
Stairway to the Skies – the third slow track on this album and also the last one for the standard edition. I like it and in my opinion very nice track to finish the album.
The Last Dance – an amazing song in my opinion. The atmosphere is simply magnific! I wonder why it ended up only as an bonus track. Probably didn’t fit the concept after all.
Empty Eyes and I Don’t Wanna are another bonus tracks. Unfortunately I was not able to find them and just heard the sample. But they sound promising. 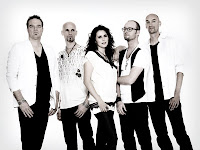 So all in all I LOVE this album! It was definitely worth waiting for it. Now I hope that I will be able to see them live soon. I do not expect them to play any near my country but as soon as I'll be in Britain and them too I'll go no matter what. This is a must go.
Here is the video of bonus tracks samples.

Thanks for the review!

The more I listen to this the more I love love LOVE "Sinead." I actually think I like it better than "Faster." Which is a tough song to beat! The catchiness on this album is incredible and I don't know how they kept it up track after track, either. The pace of this album is also noteworthy...kind of novel-like, if you ask me, and it just shows another strength in the writing & compositions.

I agree that once again we have this multiple release thing going on with different parts of the world getting different versions. So annoying! I have heard "The Last Dance" and think it's fantastic. All this means is that I'm going to have to downnload a different version of the album in order to get the bonus tracks because the North American release ends at "Stairway to the Skies." Grrr!

Yeah that sucks! I will wait and then buy the album but definitely not in my country. I don't want to end up once again with empty booklet. Even though they are not under Universal but I don't want to waste another 15€.

Sinéad is a real addiction for me. The chorus is still in my head.

I can't seem to find the version of the CD with the 3 bonus tracks on any of my go-to sites for downloading. The only version I can find that is different from the one I'm getting contains "Utopia" (not my fave song at all!) and "The Last Dance." Hmph!

Thanks punkkat! Also thanks for the Leaves' Eyes link...I have no idea why your comment isn't showing up there, but I got it via email.

Excellent reviews, girls! This album rocks! It is actually the first WT's album that I like.
My fave songs so far: Faster and Sinead which is just mind-blowing!
I think this is something so refreshing into the world of symphonic metal/rock. It sounds so different and new that I can't help but love it!
*listening to the unforgiving right now*